Winner of the 2019 ENMISA Distinguished Book Award from the International Studies Association.

Before Russia invaded Ukraine, it invaded Georgia. Both states are part of Russia’s “near abroad”—former Soviet republics that are now independent states neighboring Russia. While the Russia-Georgia war of 2008 faded from the headlines, the geopolitical contest that created it did not end. Six years later, Russia invaded and annexed Crimea, once part of Russia but part of independent Ukraine since the Soviet collapse. Crimea’s annexation and subsequent war in eastern Ukraine have produced the greatest geopolitical crisis on the European continent since the end of the Cold War.

In Near Abroad, the eminent political geographer Gerard Toal moves beyond the polemical rhetoric that surrounds Russia’s interventions in Georgia and Ukraine to study the underlying territorial conflicts and geopolitical struggles. Central to understanding are legacies of the Soviet Union collapse: unresolved territorial issues, weak states and a conflicted geopolitical culture in Russia over the new territorial order. The West’s desire to expand NATO contributed to a growing geopolitical contest in Russia’s near abroad. This found expression in a 2008 NATO proclamation that Georgia and Ukraine will become members of NATO, a ‘red line’ issue for Russia. The road to invasion and war in Georgia and Ukraine, thereafter, is explained in Near Abroad.

Geopolitics is often though of as a game of chess. Near Abroad provides an account of real life geopolitics, one that emphasizes changing spatial relationships, geopolitical cultures and embodied dispositions. Rather than a cold game of deliberation, geopolitics is often driven by emotions and ambitions, by desires for freedom and greatness, by clashing personalities and reckless acts. Not only a penetrating analysis of Russia’s relationships with its neighbors, Near Abroad also offers a critique of how US geopolitical culture frames Russia and the territories it sustains beyond its borders.

Learn more about Near Abroad by visiting the Oxford University Press website. 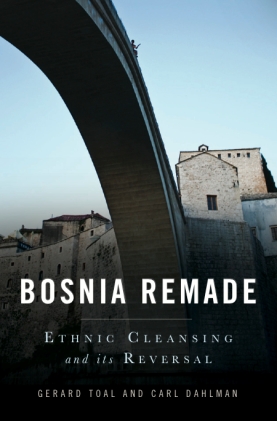 Shortlisted for the 2012 Joseph Rothschild Prize in Nationalism and Ethnic Studies.

Bosnia Remade is an authoritative account of ethnic cleansing and its partial undoing from the onset of the 1990s Bosnian wars up through the present. Gerard Toal and Carl Dahlman combine a bird’s-eye view of the entire war from onset to aftermath with a micro-level account of three towns that underwent ethnic cleansing and–later–the return of refugees.

There have been two major attempts to remake the ethnic geography of Bosnia since 1991. In the first instance, ascendant ethno-nationalist forces tried to eradicate the mixed ethnic geographies of Bosnia’s towns, villages and communities. These forces devastated tens of thousands of homes and lives, but they failed to destroy Bosnia-Herzegovina as a polity. In the second attempt, which followed the war, the international community, in league with Bosnian officials, endeavored to reverse the demographic and other consequences of this ethnic cleansing. While progress has been uneven, this latter effort has transformed the ethnic demography of Bosnia and moved the nation beyond its recent segregationist past.

By showing how ethnic cleansing was challenged, Bosnia Remade offers more than just a comprehensive narrative of Europe’s worst political crisis of the past two decades. It also offers lessons for addressing an enduring global problem. 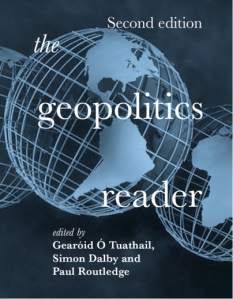 This extensively revised second edition of The Geopolitics Reader draws together the most influential and significant geopolitical readings from the last hundred years. A compendium of divergent viewpoints of global conflict and change, it includes readings from Halford Mackinder, Theodore Roosevelt, Adolf Hitler, George Kennan, Samuel Huntington, Edward Said, Osama Bin Laden and American neoconservatives. It draws on the most illuminating examples of imperial, Cold War and contemporary geopolitics, as well as new environmental themes, global dangers and multiple resistances to the practices of geopolitics.

Whilst retaining a coherent five part structure, the selection of readings has been updated to account for recent developments in the critical study of geopolitics and the post 9/11 geopolitical landscape (including issues in technoscience, biowarfare, oil politics, and terrorism), and key questions address issues of the transformed nature of threats in the new millennium, the debate over the hegemonic position of the US, and non-American perspectives on contemporary geopolitics.

Skillfully guiding the reader through the divergent viewpoints of global conflict and change, the editors, all leading geopolitical authorities, provide comprehensive introductions and critical commentaries at the start of each section. Illustrated with provocative cartoons, this second edition of The Geopolitics Reader is the ideal textbook for introductory classes on international relations, world politics, political geography and, of course, geopolitics, provoking lively discussion of how questions of discourse and power are at the centre of the critical study of geopolitics. 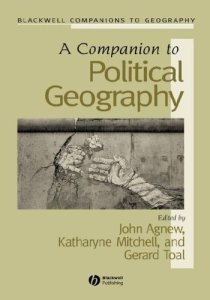 A Companion to Political Geography presents students and researchers with a substantial survey of this active and vibrant field.

– Introduces the best thinking in contemporary political geography.
– Contributions written by scholars whose work has helped to shape the discipline.
– Includes work at the cutting edge of the field.
– Covers the latest theoretical developments.

“This is a book that simply exudes authority. It is an excellent buy that will satisfy a broad readership within and outside political geography from advanced undergraduate level upwards.”
Simon Barrett, Reference Reviews

Learn more about A Companion to Political Geography.

The Geopolitics Reader offers an interdisciplinary sourcebook of the most important political, geographical, historical and sociological readings of geopolitics in the late twentieth century. The Reader is divided into five parts which draw on the most illuminating examples of imperial, Cold War, contemporary geopolitics, new environmental themes and multiple resistances to the practices of geopolitics. The editors provide comprehensive introductions and critical comment at the beginning of each part and visual ‘geopolitical texts’ in the form of political cartoons are integrated throughout. Encouraging exploration of divergent viewpoints of global conflict and change this invaluable compendium includes readings by Martin Luther King, Vaclav Havel and George Bush.

“This unique sourcebook gives an insight into the hardy perennials of spatial geopolitics while also identifying emerging varieties associated with environmentalism found this riveting reading: the A to Z of geopolitics, from classic accounts to emerging trends.”
–John Agnew, University of California, Los Angeles

Rethinking Geopolitics argues that the concept of  geopolitics needs to be conceptualised anew as the twenty-first century approaches.
Challenging conventional geopolitical assumptions, contributors explore:
* theories of post-modern geopolitics
* historical formulations of states and cold wars
* the geopolitics of the Holocaust
* the gendered dimension of Kurdish insurgency
* the cold war world
* political cartoons concerning Bosnia
* Time magazine representations of the Persian Gulf
* the Zapatistas and the Chiapas revolt
* the new cyber politics
* conflict simulations in the US military
* the emergence of a new geopolitics of global security.
Exploring how popular cultural assumptions about geography and politics constitute the discourses of contemporary violence and political economy, Rethinking Geopolitics shows that we must rethink the struggle for knowledge, space and power.

‘…this is an important book containing much food for thought and it deserves to be widely read’ – Mark Blacksell, Progress in Human Geography 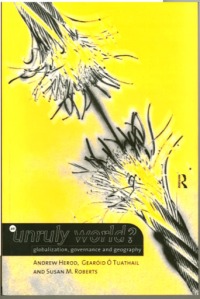 An Unruly World explores the diverse conundrums thrown up by seemingly unruly globalization. Examining how fast transnational capitalism is re-making the rules of the game, in a wide variety of different places, domains, and sectors, the authors focus on a wide range of issues: from analysis of ‘soft capitalism’, and the post-Cold War organizational drives of international trade unions, to the clamour of states to reinvent welfare policy, and the efforts of citizen groups to challenge trade and financial regimes. An Unruly World argues that we are not living in a world bereft of rules and rulers; the rules governing the global economy today are more strictly enforced by international organizations and rhetoric than ever before.

‘Overall, this is a book that has to be read. It extends the debate on globalization and provides much to build on and react to.’ – Environment and Planning, Vol 16, 1998

Critical Geopolitics presents an analysis of the ideas which have driven nations to attempt to remap the globe in their own image. The essays – ranging across Britsh colonialism to Nazi geopolitics, from America’s ambitions to the bloodshed of Bosnia and Ireland – aim to unearth a political history of the struggle for space and power in the West, and revise the geographies of global politics at the end of the 20th century.

In 2015 the journal Progress in Human Geography featured this book in its “Classics Revised” series. See the exchange and response.