On the 6th anniversary of the horrific tragedy of the destruction of the civilian passenger aircraft Malaysian Airways Flight 17 over eastern Ukraine, my colleagues and I published the results of our latest survey on blame attribution over the event in The Monkey Cage blog of the Washington Post.

Here’s the initial write up of the first survey results.

And a link to the subsequent academic paper.

And a link to the latest results.

The piece has lots of links to excellent sources for those interested in following up. We have results from other locations and we’ll be publishing these in due time.

The COVID crisis has upended the planned roll-out of the research results of the Geopolitical Orientations Project (see previous post from February). Fortunately we were finished the survey research process just before the crisis really hit (though we were unable to survey in all the places we had hoped to do so, for various reasons).

We were able to compose a series of short pieces for general audiences on data from the project. While we had positive experiences with various editors, it is worth noting that we do not choose the headings or sub-headings of these pieces nor the accompanying photo. Further, the process of writing for a general audience does mean some compromise on language and framing. The ‘translation’ from academic language to popular language can sometimes be tricky. Here are the pieces that have been published to date:

Our project is structured as a panel survey. Researchers often hope for a “big event” in between the first round of surveys and the second round. Well, we’ve got that and its massively ugly and awful. No one wished for this.

Because of a longstanding interest in geopolitical conspiracies, our surveys did include some generic and specific blame attribution conspiracy statements. One of these was about the spreading of a virus. We’re analyzing that now and will write it up for academic publication, with a general audience version thereafter I expect.

Below are my currently scheduled or proposed academic conference presentations for this year (so far). Some are joint presentation with Dr John O’Loughlin, Institute of Behavioral Science, University of Colorado-Boulder (johno@colorado.edu). Together with Dr Kristin Bakke, we’ll also be presenting data from our NSF/RCUK project throughout this year at universities and research centers. (My book-in-progress work is separate from all this).

Association for the Study of Nationalities Conference, New York, May

With Russia or NATO? Preferences from 2020 survey data for military relations in Western Post-Soviet Eurasia.

Here’s a list of pieces that have appeared in 2019. All were collaborative publications this year. With over 3000 downloads so far, the Crimea paper manifestly generated the most interest. There should, consequently, be considerable interest in our forthcoming work on public opinion in this most disputed of territories.

Those interested in my current book project (which is going very slowly) will find the conversation with Veit Bachmann the most relevant (and hopefully interesting).

Gela Merabishvili’s Ph D research on border walls continues apace. Hopefully he’ll be able to defend his Ph D research this year, and start to get more of his research into the public arena.

The Rise of Conspiracist Geopolitics

I am extremely grateful to the ENMISA Specialty Group of the International Studies Association for their Distinguished Book Award of 2019. Thanks in particular to Dr Bahar Baser for the presentation of the award at the ISA meeting in Toronto and to Dr Daniel Naujoks for the photograph.

As part of a special issue on Ukraine 5 years after Maidan, the journal Eurasian Geography and Economics has published an article John O’Loughlin and I wrote on the conflict over Crimea (available free access for a limited time). The article highlights what we term ‘scalar disjunctures of legitimacy,’ which is simply a summary phrase for the fact that most of the world condemns Crimea’s annexation/reunification whereas there is consistent evidence that most Crimeans consider this act as legitimate. The commonplace speech act ‘Crimean annexation’ in much of the world de-legitimates the action. Some go further and give the episode a Nazi-frame, referring to it as an ‘anschluss.’

Framed within the longstanding rhetorical formulas of ‘self-determination’ produces a very different reality. A ‘Crimean people’ living in a recognizable and clearly bounded territory exercised their self-determination right and choose to (re)join the Russian Federation.

We term this essentially contested condition the Crimea conundrum.

Gela Merabishvili and I wrote an article on the geopolitical enterpreneurship within Georgian surrounding ‘borderization,’ the construction of a physical barrier to free movement by a de facto state to assert its claim to create an ‘international’ border. The article is one-sided in that it only examines the issue in Georgian political life. A fuller study would examine the issue in South Ossetian political life and within North Ossetia and the Russian Federation more broadly. Nevertheless it is a start on developing a critical geopolitics on an important topic. It is available free access for a limited time at the Caucasus Survey journal website.

Observant readers will know that the front cover of Near Abroad features a Georgian group protesting borderization. 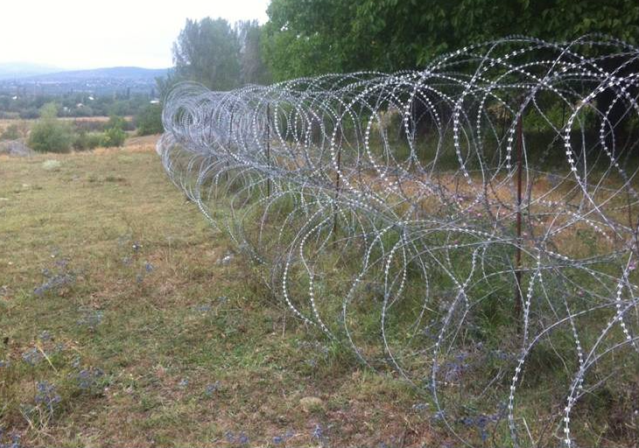 History is full of short wars that are quickly forgotten. The five-day war between Georgia and Russia war a decade ago this week felt significant at the time but faded from the headlines quickly as a severe financial crisis unfolded. Russia’s annexation of Crimea, however, brought renewed attention to the war as a crucial moment in the emergence of Russian revanchism. Ten years later, what is the real significance of the August 2008 war?

The truth was more complicated and revealed in a subsequent investigative report led by Swiss diplomat Heidi Tagliavini. Saakashvili’s government initiated what the report tactfully termed “open hostilities” on the evening of August 7, hours after unilaterally declaring a ceasefire. Civilians, defenders and some Russian peacekeepers died in Georgia’s initial military barrage against Tskhinvali (Tskhinval to Ossetians), the ‘capital’ of South Ossetia.

Already primed for trouble, Russian troops on the border mobilized in response and were in the Roki tunnel in the early hours of August 8. Their progress to Tskhinvali, where street fighting raged, was slow. It took the lumbering Soviet era tanks three days to finally arrive from the Russian border, a distance of only 37 miles. Russian airplanes attacked Georgian positions both inside and beyond the contested regions of the country. Russian troops pushed beyond South Ossetia and Abkhazia, occupying large parts of Georgia, and menacing the capital Tbilisi.

Though Saakashvili had miscalculated and Georgia was soon defeated, it won the public relations battle in Washington DC. Saakashvili’s fluent English, media entrepreneurship and ties on Capitol Hill proved crucial. Instead of a distant skirmish in a faraway region of the Caucasus mountains, the war was framed as a globally significant harbinger of a new Cold War.

Senator Joseph Biden rushed to Tbilisi and declared upon return that the war was the most significant in Europe since the end of the Cold War. Senator John McCain, running as the Republican candidate for president, agreed. He admired the hard-charging Saakashvili and had even visited South Ossetia in 2006.

Condemning Russian aggression at a campaign rally in York Pennsylvania, McCain solemnly pronounced that “today, we’re all Georgians.” The line garnered modest respectful applause. (His declaration that “it’s time we got serious about our energy crisis and stop sending $700bn a year overseas to countries that don’t like us very much” brought loud applause and cheers, a sign of things to come for the Republican Party).

Lost amidst this geopolitical emotion was the complicated situation on the ground within South Ossetia. Saakashvili’s ill-judged offensive was disastrous for the ethnic Georgians living in the area and nearby, to say nothing of Ossetian and other victims. Thousands lived in a cluster of villages to the north of Tskhinvali, an enclave within territory unevenly controlled by separatists. When war came, these villagers were forced to depart suddenly, abandoning homes, land and property that would soon be ravaged by irregular militias from all over the Caucasus. The same held for villagers in other parts of South Ossetia and beyond.

Travelling on the road to Tskhinvali into March 2010, I witnessed the scale of the subsequent destruction. Village after village along the Transcaucasian highway lay in ruins, a panorama of once thriving settlements reduced to rubble and ruin. The thoroughness of the destruction reminded me of Bosnia, a charred and gutted landscape produced less by fighting than plunder afterwards. As in Bosnia, there was also a logic at work, a claiming of territory by negation, by destroying it as a meaningful place for those who once lived there. Geographers have a word for this: domicide, the killing of place.

Travelling further into the town revealed how Ossetians also had homes, apartment buildings and community centers destroyed by the war. For them, the war was a trauma of exposure before welcome rescue by the Russian military. The overwhelming majority of Ossetians today want to join Russia.

Many Atlanticist officials today see the August War as a warning that was ignored. One analogized it as a ‘Rhineland moment’ that was later followed by Crimea as a ‘Sudetenland moment.’ Analysts point out that Russia not only invaded a sovereign country for the first time but used new weapons, cyberwar and Russia Today, to aggressively further its aims. Hybrid warfare, they argue, found its first kinetic expression during the August War.

The problem with these interpretations is that they are forms of ‘thin geopolitics.’ They present a one-sided account of the war as the unfolding of Russian expansionist desire rather than a competitive geopolitical game of expansion and reaction, with significant localized dimensions. The August War was the first violent clash between two very different ‘imperial’ formations, an EU/NATO with expansionist aspirations, and a Russian state reviving old imperial practices and attitudes. Just prior to the August War, it was the EU/NATO states that initiated revisionist policies. The first was the recognition of Kosovo, the first time a secessionist territory within a post-communist independent state was recognized as an independent state. The second was NATO’s Bucharest Declaration that Georgia and Ukraine would become members. Border change and geopolitical re-alignment was the EU/NATO’s first move in 2008; the August War of 2008 and subsequent recognition of Abkhazia and South Ossetia as independent states was Russia’s response. Local actors jockeyed for position within this geopolitical tussle.

‘Thicker’ forms of geopolitics inevitably paint a more complicated and less theological picture of conflicts. They study the game of geopolitics rather than support one side, right or wrong. But they are vital if policy-making is to rest on geographic facticity not theological discourse. The August 2008 war was a co-created conflict across multiple scales. Making the war into another citation of sin in a New Cold War theology of complaint against Putin does not make that complexity go away.

Dr Gerard Toal is professor of government and international affairs at Virginia Tech National Capital Region. He is the co-author of Bosnia Remade: Ethnic Cleansing and its Reversal (Oxford, 2011). His latest book is Near Abroad: Putin, the West and the Contest for Ukraine and the Caucasus (Oxford, 2017). @Toal_CritGeo

The following is a working correction list for Near Abroad: Putin, the West, and the Contest over Ukraine and the Caucasus. Oxford University Press have this list and the next print run of the book will incorporate these corrections (some are already fixed). If you’ve spotted an error not listed please let me know about it: toalg@vt.edu.

P. 236: “the three problems… facing Ukraine” should be “facing Crimea”

P. 243: First mention of Akhmetov so should have his first name listed: Rinat (this name cite is absent from the index)

Back of the Book Jacket.

Murphy blurb:
mis-spacing ‘the’
Add ‘these’ before “selected conflicts.”

Mitchell blurb:
answers –> answer
his –> its