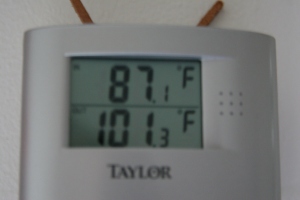 Washington DC has been through an eventful few weeks, and the action is not all at the White House, Supreme Court and in Congress. A ‘microburst’ weather storm left many residents without power on the 21st of June (including our home) and, as many news viewers know, a derecho rolled across the eastern seaboard late on the 29th, leaving millions without power and thousands with extensive damage to their property. Since then Washington DC has been under an unforgiving sun, with ten straight 95 degree days, possibly topped today by an all time record high temperature (the previous high for this day was only set two years ago). We lost power not right away but after I had filled the fridge and invited a group of friends over to watch the Euro2012 final. We lost power at half-time and got it back 30 hours later after most things had spoiled in the fridge.

The frequency with which Washington DC looses power has always struck me as revealing of the limits of the US’s sense of modernity. It is now a very old modernity and the evidence that it is coping badly with the now predictable technoscientific challenges of global risk society is incontrovertible. The US desperately needs infrastructural investment and to refit itself for the new climate regime of extreme weather. (Even a local resident conservative, albeit a Canadian, agrees). US workers and firms could use the work. But are the dots being connected in Congress? No, instead the preferred stimulus this fall is an avalanche of special interest money into the political system to try to buy the presidency and the new Congress. Ordinary Americans are hot and bothered these days, but those special interest dollars will work hard to convince them its the other political guy’s fault. Time for some winds of change in the ‘capital of the free world,’ or just some darn wind to cool us off.