As the United States and France consider military strikes in retaliation against the Assad regime it is worth recalling the use of chemical weapons by Saddam Hussein’s regime in Halabja, north east Iraqi Kurdistan on 16 March 1988. It is estimated that as many as 5,000 people were killed directly, with thousands dying later or suffering longterm disabilities. The horror of Halabja, like the attacks on 21 August 2013, vaulted the place to a dark roster of fame, a catalogue of places whose very name incites horror, crime, infamy. This dark geography has received little attention from geographers but should. When did this begin, and how has its twentieth century form changed as modes of communication and visualization have been transformed? Guernica clearly is an important cite/site. From World War II one need only cite Stalingrad, Auschwitz and Hiroshima in order to mobilize massive affective memories, in some instances, different and divisive about ‘ultimate crimes against humanity.’ There are many many smaller ‘national’ cases: Lidice, Oradour-sur-Glane. From the late and post-Cold War period, we have Halabja and Srebrenica, from the war on terror 9/11, 7/7, Beslan, in instances of global cities the date eclipsing the place. The 21/13 moment in Damascus does not seem to have a singular affective frame yet.

Given that Halabja is a relevant cite/site in the current debate, it is worth asking how deep is our understanding of Halabja as a place, and as an event. Not deep enough if we rely on the account in books where it is merely a cite in a litany of genocide. Why, for example, would the residents of Halabja set fire as they did on 16 March 2006 to the very memorial in their city to the 1988 attack (pictured above)? The explanation for this astounding act is provided in an excellent ethnographic research article by Nicole F. Watts, in the department of Political Science at San Francisco State University. Her article is “The Role of Symbolic Capital in Protest: State-Society Relations and the Destruction of the Halabja Martyrs Monument in the Kurdistan Region of Iraq” and it is published in Comparative Studies of South Asia, Africa and the Middle East (2012) 32(1): 70-85.

I had the pleasure of hearing Nicole present her research a few months back at a meeting on the Kurds. Her account paints a picture of the deeply contested localized geopolitics of the town, which is background to the 2006 protest and its attempted suppression. She writes:

Waves of fighting in and around Halabja among different Kurdish groups between and  left the population war weary and not particularly loyal to any one political faction. Political instability also meant no party could ever seriously establish any sustainable development programs. Islamist parties and the PUK battled for Halabja in the early 1990s before the town came under KDP control, making it the only area in Sulaimaniya Governorate controlled by the KDP in the civil war of those years. It changed hands in 1966 with the KDP-PUK cease- fire, when it was handed over to the PUK. Nonetheless, the PUK could not cement its authority there, governing alongside Islamist parties in an uneasy de facto alliance until 2001 when a faction of the dominant Islamic Movement of Kurdistan merged with the radical Jund al-Islam to form Ansar Al-Islam, which based itself in the environs of Halabja and exerted considerable influence in the city. Between 2001 and 2003  — a period during which the rest of the Kurdish region north of the thirty- sixth parallel was governed by the KDP and PUK —Halabja and a swath of territory around it were largely the domain of Ansar al- Islam. Music was restricted and some girls’ schools closed. Halabja came under KRG control only in February, just before the US and British invasion of Iraq, when Kurdish peshmerga with US air support moved in. 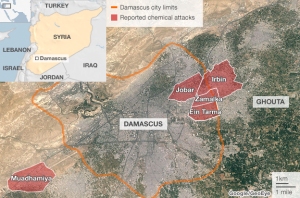 The broader point is that we would do well to ask detailed specific questions about the places that have become targets. They are at the nominal center of the debate yet risk becoming lost as various parties and groups promote their own philosophical, legal, demonstrative, and self-concerned story lines about what the use of chemical weapons in Syria really means.