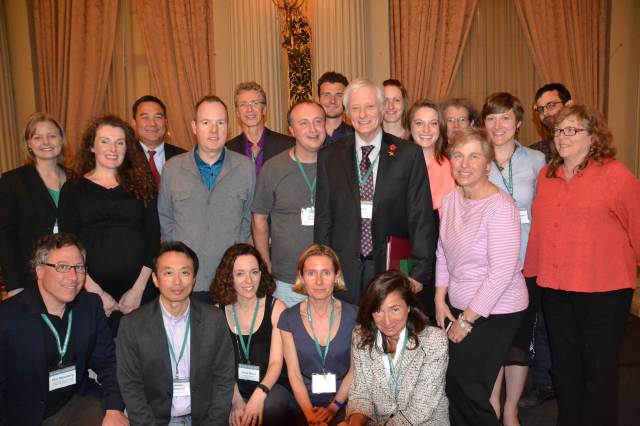 The Association of American Geographers gathered in the Crystal Ballroom of the Biltmore Hotel on 13th of April 2013 for an awards luncheon. The location was an appropriate one to dispense awards as it was the site of a series of early American Academy of Motion Picture Arts and Sciences Awards. Among those honored was the great Edward Soja, fittingly feted in the city he has written about for decades, and Sally Marston. I was part of a two table group to honor my first graduate academic adviser, and ongoing research collaborator, Dr John O’Loughlin. JohnO as he is affectionately known by his now legions of graduate students and friends, was honored for Distinguished Scholarship, an award he richly deserves as he has produced a remarkable corpus of research articles and books from the nineteen seventies to today. He is also held in high esteem by his former and current graduate students, and others, for many many qualities beyond his research productivity and excellence. Exhortation to hard work through humor is an abiding quality, one suitably honored by his ‘clan’ with an extra award on the day, that of Soviet ‘Hero of Labor‘ (a category of praise he has used for decades for those slaving away on research projects). Unlike the Soviet original, this one was truly a ‘bottom up’ award for a genuinely inspiring figure in the discipline of Geography and beyond. Congratulations JohnO. ‘Tis a pleasure to be working with you.

Sometimes you can’t make things up! Putin Brings Back ‘Hero of Labor’ Medal