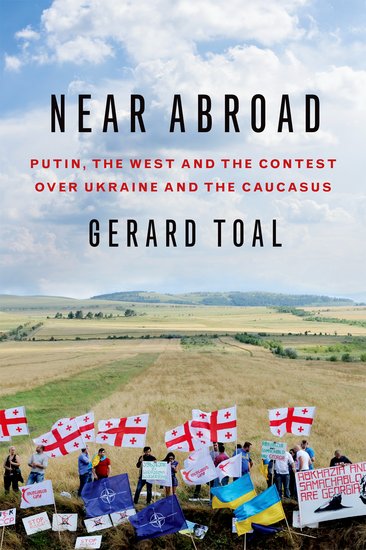 Before Russia invaded Ukraine, it invaded Georgia. Both states are part of Russia’s “near abroad”—former Soviet republics that are now independent states neighboring Russia. While the Russia-Georgia war of 2008 faded from the headlines, the geopolitical contest that created it did not end. Six years later, Russia invaded and annexed Crimea, once part of Russia but part of independent Ukraine since the Soviet collapse. Crimea’s annexation and subsequent war in eastern Ukraine have produced the greatest geopolitical crisis on the European continent since the end of the Cold War.

In Near Abroad, the eminent political geographer Gerard Toal moves beyond the polemical rhetoric that surrounds Russia’s interventions in Georgia and Ukraine to study the underlying territorial conflicts and geopolitical struggles. Central to understanding are legacies of the Soviet Union collapse: unresolved territorial issues, weak states and a conflicted geopolitical culture in Russia over the new territorial order. The West’s desire to expand NATO contributed to a growing geopolitical contest in Russia’s near abroad. This found expression in a 2008 NATO proclamation that Georgia and Ukraine will become members of NATO, a ‘red line’ issue for Russia. The road to invasion and war in Georgia and Ukraine, thereafter, is explained in Near Abroad.

Geopolitics is often though of as a game of chess. Near Abroad provides an account of real life geopolitics, one that emphasizes changing spatial relationships, geopolitical cultures and embodied dispositions. Rather than a cold game of deliberation, geopolitics is often driven by emotions and ambitions, by desires for freedom and greatness, by clashing personalities and reckless acts. Not only a penetrating analysis of Russia’s relationships with its neighbors, Near Abroad also offers a critique of how US geopolitical culture frames Russia and the territories it sustains beyond its borders.

“Near Abroad is a brilliant and indispensable contribution to our understanding of post-Soviet politics and the hidden power of geopolitical culture. Examining the conflicts in Georgia and Ukraine, Toal convincingly shows that geopolitical practice is neither inherently rational nor driven by objective external pressures, but is rather infused with deep normative assumptions about the legitimate boundaries of political spaces, shared discourses and flows among transnational political communities, and highly stylized emotional appeals.” — Alexander Cooley, Director, Harriman Institute, Columbia University; author of Logics of Hierarchy and Great Games, Local Rules.

“Gerard Toal is one of the smartest and most interesting thinkers working on post-Soviet politics today and his incisive new book, Near Abroad, does not disappoint. Toal sheds new light on how Russians think about their neighbors, with major implications for regional stability and the West more generally.” — Henry Hale, Professor of Political Science and International Affairs, George Washington University; author of Patronal Politics.

“Cutting through the overarching narratives that dominate discussion of Russia’s engagement with its ‘near abroad,’ Toal offers telling insights into the underlying geopolitical conceptions and arrangements that are at the heart of the territorial struggles that have unfolded in Ukraine and Georgia. The book is not just a contribution to understanding selected conflict, however. It will help audiences beyond the academy appreciate the nature and value of the ‘critical geopolitics’ project that Toal himself has played such an important role in advancing.” — Alexander Murphy, Professor of Geography, University of Oregon, and former President, Association of American Geographers.

“In this valuable work, Gerard Toal attempts to answers the question, ‘Why does Russia invade his neighbors?’ Toal performs the deft and essential balancing act of recognizing both that Russia poses significant threats to its region and that events and leaders outside of Moscow have also played a role in the deteriorating relationship between Russia and the US. This book is an extremely important contribution for those of us looking for a deeper, more thoughtful and challenging analysis of the dynamic between Russia, its neighbors like Ukraine and Georgia, and the US.” — Lincoln Mitchell, author of The Democracy Promotion Paradox.

1 Response to Near Abroad